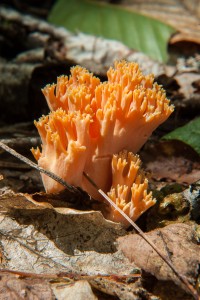 During the late summer months and after a heavy rain the forest floor bursts open with an enormous variety of mushrooms forcing their way through the composting cover of leaves and branches. Photographing them is an amazing experience as each mushroom is so different, either because of the variety of species or because it is unique even within the same species. After spending several days photographing I became aware of something I had not noticed before – how each mushroom adapts to its location as it forces its way through to the light. The mushroom P5437 shows an example of it being reshaped by a log that it was growing under while P5416 pushes up and through the needles left by coniferous trees in the surrounding area.I like to identify my photographs of plants and animals with their common names. However, there are so many varieties of mushrooms and the subtleties of each make them particularly difficult to identify. As the difference between an edible mushroom and a poisonous one can be minute it is better to leave identification to those with more expertise than I and enjoy the images for their own sake.The National Audubon Society’s “Field Guide to North American Mushrooms” is an excellent source of information for identifying mushrooms and other background information, for example: mushrooms have been thought of as food of the Gods and were once believed to be from Zeus’s lightening bolt and “Little People” were supposed to have danced around them at mid night performing magic rites.