I’ve been tracking beavers for a number of years as I find their life and habits fascinating. I want to relay some of my experiences with these industrious and sometimes playful creatures. I’m sure you’ve seen nature films that feature great shots of beavers taken on a bright sunny day, but in reality beavers are primarily nocturnal with most beaver activity taking place at dusk or at night. If you do see a beaver during the day it will most likely be eating or grooming itself which it often does to distribute an oily secretion over its fur to protect it from the water.

I discovered a family of beavers out for a springtime munch on tender branches, photographed on the Humber River in March. The family consisted of two adults and their off-spring “kits”. The close-up photographs show their young features indicating they were likely born in the spring or fall of the previous year. It is rare to be able to observe beavers for an extended period of time, as I was able to do on this occasion. They certainly were aware of my presence as they would look up with a watchful eye every once in a while. We were only about 20 to 30 feet away, which is very close. During this late afternoon the beavers seemed content to be eating and where still doing so when we left. The photographs “Beaver Interaction” show the adults being very affectionate and playful as they rolled around and around in the water and chase each other. This may very well have been a prelude to “mating” which generally takes place during January and February but can be as late as April. (The gestation period is four months at which time a litter of four kits is common and they may have a second litter during the same year.)

I returned several days after this but didn’t see them again. There was ample evidence of them being in the area previously, like the slides on the bank they used to reach the trees that their able teeth had gnawed until they fell to the ground. 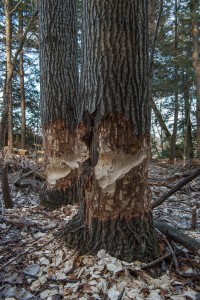 In North America, Beavers make the biggest changes to the landscape after humans. Beavers are great loggers and often fell trees of enormous size as well as smaller ones having tender branches that are used for food. I’ve been watching and photographing a number of areas and find it intriguing that they will work in one area for a time, maybe a year or two, then move to another location of the forest even though their dens remain in the same location and there are still plenty of trees within reach. It seems that different beaver families have different eating habits (or tree preferences). The families of river beaver that I watch in King Township seem to like larger trees while the families I watch on a lake in Nova Scotia seem to prefer smaller trees, bushes and lily pads, perhaps because the lake beaver need branches for their homes but aren’t preoccupied with building dams which require heavier materials. I’ve gone many times to their logging areas in hope of obtaining a photograph of them working on large trees but they tend to be more cautious of my presence on land, where they are more vulnerable to predators, than in the water. I was very privileged at one time when a beaver came up a steep embankment, crossed in front of me and began gnawing on a tree close by. The beaver worked away, behind the tree, so I never got the photo I hoped for but was thrilled that it worked away knowing I was there.

Once I see a beaver in a particular environment or situation, over a number of visits, I expect to be able to return at any time to see them but they are not consistent with my expectation and their habits change seasonally. The end of winter and early spring is the time I see them working away on large trees, felling them on the spot. Late summer seems to be the time for building or repairing dams and lodges while the fall is often the time they collect branches for their “cache” which they will use for food during the winter months.

(The cache is a large collection of branches in the water close to their dens. They are most likely to access it from under the ice during the winter and it is likely that there will also be a “breath hole” through the ice, close by.)

During one winter I visited a site on the East Humber River regularly and while disappointed that sightings of the beaver were rare there were usually signs of their activity – including a breath hole near their food cache and tracks up the steep bank of the river where there was evidence of them gnawing on trees. On one of these visits I wasn’t prepared for what awaited me. When I went to see if there was any evidence of activity near the breath hole I was surprised and disappointed to see blood and fur on the ice surrounding the hole. One of the beavers’ few predators in this area was successful in a hunt. The tracks on the ice and thin layer of snow indicated that it was most likely a feral dog or coyote. While I know there were other beaver in the area I didn’t see any sign of them for the remainder of that winter.

The activities and habits of beaver living in a lake are somewhat different than their river cousins. The first and most obvious is that the river beaver tend to dig their dens into the mud river bank (as a result are often referred to as Bank Beaver) while lake beaver build beaver lodges out of sticks and branches they cut and drag from the woods. Interestingly, while I’ve seen many large trees felled by beavers, I’ve never seen the largest ones on either their dams or lodges, although for these relatively small creatures they can drag some pretty big branches over long distances. The beavers do eat the bark of the trees and by cutting them down can access their branches. The photos of the young beavers at Molega lake were taken at night. These kits, 4 of them, were playful and interacted with us while we were in our canoe. Photographing them was a challenge – I’ll get to that later. One of the favourite foods of these young beavers was lily pads, they munched for hours on end while the adult beavers left for parts unknown. I’m guessing that the younger beavers where in fact teething and the soft lily pads where a little easier to deal with than large trees and branches. Near the lodge and neighbouring woods there was little evidence of large trees being felled by the adult beavers – unlike the river beavers. This was true of two different families of beavers in different locations on the same lake. However, while I didn’t see any evidence of large tree destruction by these 2 distinct families I have seen an area, some distance away, where beavers had cut through a significant number of very large trees and made their food cache under a cottager’s marine railway.

During August of 2007 my canoe partner and I, as usual, took our evening canoe trip around the perimeter of the nearby shores watching the sun set and awaiting the moon rise. On this particular evening we followed the shore line to a picturesque cove just as the sun was going down. We quietly coasted into the cove and sat still for a time until we noticed movement in the water at the other end of the cove. We gently paddled toward it and were rewarded by the site of a young beaver nibbling on plant growth near the waters edge and where the wetland and lake meet. We watched for what seemed like hours being careful to not be detected by the beaver. This was to become a nightly routine that became more engaging as the summer turned into fall. Each evening the beaver became braver and seemed to greet us as we arrived but only after the sun was down and their was little light to either see or photograph the young kits. A typical evening went like this: We arrived just before dark and I set up my camera while we quietly waited, sitting very still in the canoe. At the time when dark set in and we were about to give up on sighting them, a ripple in the water became apparent toward the end of the cove, we quietly dipped our paddles into the water and coasted into the location where the ripple was sighted, then waited. The beaver was munching on a branch and unaware of our presence (for a while). As it got darker one of the adults appeared and tried to lure us away from the lodge and the kits. It would swim near – slap its tail, dive, then surface some distance away. When we didn’t follow, it would come back and try again. Eventually it gave up and swam away, along the shore line, not to be seen again for the rest of the evening. Meanwhile the four kits were out swimming around the cove and munching on the tender water lilies. We silently canoed closer to one of them, maybe as close as 5 or 6 feet, then on seeing us it slapped it’s little tail and dove, only to resurface a moment later and look back to see what effect it had. Eventually it would go back to munching and ignore us. As we followed another kit, it turned around and began watching us, at one point it actually swam over the top of the paddle stopped for a moment looked up then carried on to the next lily pad. Moments later I could hear scratching on the bottom of the canoe, starting at the bow and progressing to the stern then up to the surface to look at us, not a foot away. Watching these young beaver became our evening activity for several weeks to follow.

While all this beaver activity was going on I was trying to photograph them – definitely easier said than done. First, trying to see the beavers after dark was challenge enough then trying to find a dark subject on a dark background through the cameras viewfinder made it even more difficult. Next, with all the auto focus aids, including the inferred beam emitted from the external flash, turned on, the camera couldn’t find the focal point. Auto focus cameras do not like black on black no matter how advanced they are. After many out–of–focus pictures and numerous pictures of nothing – I had to devise a new plan. This plan involved the use of a very high tech addition to my camera kit, an elastic band. The beavers weren’t bothered by flash lights so I used the elastic to mount a small, narrow-beam flashlight on top of my electronic flash. I then lined up the beam with the telephoto lens I was using, turned off auto focus on the camera and set the flash exposure manually. Only then was I able to get a few usable shots that were in focus with reasonable exposure; shots that will remind me of this unique experience of playing with the young beavers for years to come.