Bugs are without a doubt as fascinating as birds, plants and animals and are just as important in the make-up of the natural world. As I learn more about insects it amazes me how each has its own special characteristics for survival and propagation. 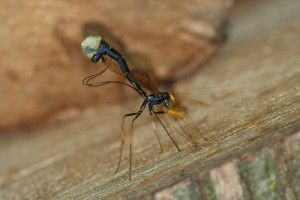 An event that really peaked my interest in insects was on one of my Hike and Click sessions a few years ago. One of the participants found a unique specimen as we hiked on the Oak Ridges Trail near Mary Lake in York Region. None of us had seen such a creature before and it was another two years before I found out what it was. It looked like an elongated wasp, with a very long thread like tail several times longer than its body. A year later I had a chance to see them again in Nova Scotia but this time there were several and I was able to spend a great deal of time photographing and watching them. The next time I saw them was early in July 2010, in my backyard, hanging around several pieces of firewood. This time I was able to observe them for hours over several weeks. The “Stump Stabber” (ichneumon) uses its very long tail (ovipositor) to lay its eggs in the tunnels that wood boring bugs have drilled in tree trunks to lay their eggs. The “Stump Stabber” eggs are laid into the eggs of the wood borer which provide it with food when they hatch.

We are all entranced by the Monarch Butterfly. I had a chance to encounter its caterpillar and watch as it devoured the leaves and pods of a swamp milk weed plant which is one of the few plants the Monarch caterpillar will feed on. As it happened there were nine of them on a single small plant that clearly wasn’t large enough to feed them all and there weren’t any other plants in the vicinity. Pam and I went on the search for more plants and found the closest were over a kilometre away so we dug one up (carefully) and transplanted it beside the now very much diminished plant. It wasn’t long before we realized that this additional plant wasn’t going to be enough to solve the problem …a new plan had to be devised. We took over half of the group of caterpillars to the newly found plants – leaving two at the original location. Unfortunately after several days the caterpillars at the original location disappeared and the ones at the transport location disappeared as well. We did see a mink not far from the swamp milk weed plants – perhaps this was the cause of their disappearance or had they finished their caterpillar stage (about 2 weeks) and were now chrysalises hanging from tree branches that we didn’t see. This question arises – what would the outcome have been if we hadn’t intervened? Sometimes our interventions come up short of our hopes and good intentions.